Note: We just try to provide information on user's deemand

Palika Park & A - Block , connaught place - Park above palika parking in c.p. is the oldest public cruising area, here lots people come daily in evening 6-8 PM , and after 8 Pm they just cruising around A block c.p. around UCB showroom. Specily on Sunday the crowd be dubble.

NEHRU PARK: The Grande Dame of all cruising places in the capital. It is generally active during the evenings, from about 7:00 p.m. till closing time, which varies according to Summer (ideally from 7:30 to 9:00 p.m.)/Winter (ideally from 7:00 to 8:00 p.m.). It's just the part opposite the Ashoka Hotel which is the Gay cruising area, including the rope bridge and the surrounding gardens. The area is badly lit which kind of

makes it ideal to move about in relative anonymity. On Sunday evenings, the gardens are rocking with over a hundred men hanging around, waiting, looking and just checking out the scene. If you are a novice and looking to meet other men, this is the place you should start with.  Make sure that you don't do anything in the park itself since it is frequented by some cops who are looking to make easy money.

PVR SAKET: PVR Saket is Open 24 hrs , So back side of pvr saket near barista on Thursdays and weekend sat late hrs 11 pm to 3 am convertaed a crucial gay place.

CENTRAL PARK, CP : This is one of the oldest public cruising areas of Delhi, albeit a little seedy now. It is situated bang in the centre of Connaught Place, the main shopping area of Delhi and is the round park in the middle. It is generally cruisy in the evenings when the light begins to fade, around dusk. This place is very popular with hustlers and a lot of undercover policemen also frequent the area so one has to exercise the necessary precautions. Due to convenience of access, it is fairly busy throughout the week. HOWEVER THIS IS SHUT NOWADAYS DUE TO METRO WORK.  THE GAY HANGOUT IS NOW IN THE INNER CIRCLE IN FRONT OF THE VOLGA RESTAURANT.  THIS PLACE IS BUSY IN THE EVENINGS WITH LOTS OF GAY MEN HANGING AROUND AND JUST WALKING IN FRONT OF VOLGA RESTAURANT.

JANAK PURI C-2-B district Park (WEST DELHI)
In a west delhi ( Janak Puri C-2-B district Park well known as fountain wala park is on the main road this is also the new gay point for west delhi gays u can see gays  daily in evening 6 to 8 pm at the gym track . this is the best time always in winters n summers. but it is risky do sexual act in the park becoz of cops.this is only the gathering point.where u can capture choice..

JAHANPANAH FOREST AT CHIRAG DELHI: This cruisy area is near the Chiragh Delhi flyover inside the Jahanpanah Forest. The best time to go is from 4 to 6 p.m. on Sunday afternoons. The boys/men there are looking for fun or money or both. Lots of bushes and benches around to have fun even in broad daylight! Be careful of police and the 'mallees' (gardeners) though.

DHAULA KUAN BUS STAND AND GARDEN: The gardens directly opposite to the Dhaula Kuan Club, situated on the road that leads to the National Airport from the round-about called Dhaula Kuan, is also a popular cruising area. However, this area finds more flavour with the army personnel stationed nearby and who are generally looking for sexual release. Again, it is prudent to err on the side of caution and to be very careful.

INDIA GATE LAWNS: These lawns are fairly cruisy, especially late in the evenings after 7:00 p.m. but are mainly frequented by army men and the likes. Also, there are a lot of male hookers so one does have to be cautious. The toilets in the park are quite happening but then again, all Do be careful and very discreet.

Vasant Vihar Park - Its just located opposite to Priya Cinema, Vasant Vihar (Best time is 8-12 night) u may find some gay guys there........

Vasant Gaon Park - A park just beside C block market and Vasant Gaon , its not so huge but you may find some local guys from Vasant Gaon in the night time. mostly on each sunday.

INTERSTATE BUS TERMINAL (ISBT): The Interstate Bus Terminal, also known as ISBT, is situated near Kashmiri Gate, in Old Delhi. For casual sex and general cruising, it is quite happening though again, fairly risky, especially if you are a stranger to the city, so one has to be on guard. All the urinals, all around and inside the ISBT and the bus stop approaching Kashmiri Gate going to Red Fort and Connaught Place are hot beds of sexual activity. Working Class and Unpretentious. AYOR!

MASSAGE PARLORS: Recently, Delhi has seen a spate of massage parlours mushrooming in most localities, usually offering home/hotel service for a price ranging between Rs. 300 to Rs. 500 (going upto Rs. 1500 for aspiring models; always settle the rate over the phone before calling for a massage) for an hour's worth. They generally have young men as masseurs and offer not only a decent massage but also, a lot else, if that is what you are looking for. These boys are generally not gay but are willing and eager to please for a nominal tip. Check out the classifieds in the Hindustan Times and the Times of India (usually the Saturday and Sunday editions under the Health & Physical Fitness column)

HEALTH CLUBS: The Hyatt Regency Hotel (Ph: 011-679 1234) at Bhikaji Cama Place, Ring Road, has not only a great Health Club complete with a well equipped gymnasium as well as Steam/Sauna/Chill Pool/Jacuzzi and Massage Rooms, but also some trendy gay men as members. The wet area is a place to meet both locals and foreign visitors. However, since most men there are straight, extreme discretion is advised. Also, be warned that a day's usage of the facilities could easily set you back Rs. 1000.

Download iDost Android APP for find people near you. 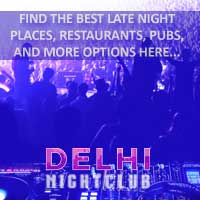